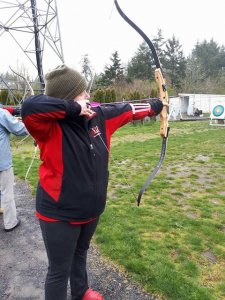 JoAnne (Gunny) practices archery before heading off the the Invictus Games later this October.

Wishing the best of luck and congratulations to Portugal Cove-St. Philip’s resident, Retired Corporal JoAnne (Gunny) Gilliland Power, who has been chosen as a member of Team Canada for the Invictus Games later this month. Retired Corporal Gilliland Power is thrilled to be representing the country at this international event, stating “I’m so excited… I feel like I’ve already won gold.”

The Invictus Games will take place from October 20th-27th, 2018, in Sydney, Australia. An international sporting event for wounded, injured and ill veteran and active service personnel, the Invictus Games highlights the power of sport to inspire recovery, support rehabilitation, and generate a wider understanding of and respect for those who serve their country. 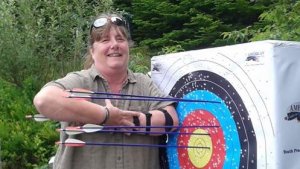 Participants at the Invictus Games take part in sports including wheelchair basketball, power-lifting, and indoor rowing. Retired Corporal JoAnne (Gunny) Gilliland Power will take part in archery and sitting volleyball. Her dedication to her sports is clear, as she has been in preparation for months, including attending training camps in Victoria, BC, and Halifax, NS.

Good luck, JoAnne (Gunny)! Your town is very proud of you for all you have achieved.